For this week's installment of BLUES ON TUES, we present Willie Dixon's classic, "Wang Dang Doodle"

On this day in 1975, our dearest Mark Marshall was birthed!
For this week's installment of BLUES ON TUES, we present Blind Willie McTell's "Cold Winter Day".
Enjoy and stay warm, kiddos!

We are excited to announce the return of BLUES ON TUES. in the form of a new weekly video series! Here are our first two installments:


"IT HURTS ME TOO" (ELMORE JAMES cover)

The birth of our band stemmed in a very organic and unplanned manner. In late 2010, Mark and I expressed a desire to perform the classic blues catalogs we had been immersing ourselves in.  As we listened to the works of the greats like Muddy Waters, Son House, Howlin' Wolf and Freddie King, we noticed a singular thread... complete unabashed release of emotion.  These artists performed with utmost confidence but at the same time a balance of ego.  The music was the motor.  No gimmicks, no guise, just pure passion and punch.  It was our desire to play music of this spirited intensity within the community of close friends and talented musicians that led to the inception of Blues on Tues.  Blues on Tues became a monthly series hosted on Tuesday nights at the Parkside Lounge in Manhattan. 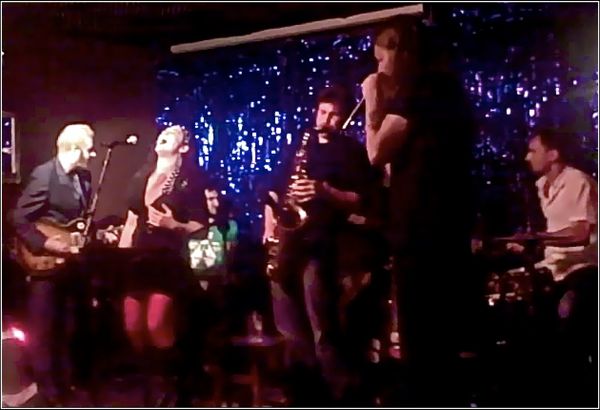 Our aim was to set up an environment in which there was no pressure, no perfection, and no pretense.  We chose a differing charity each month and all proceeds from the tip jar were donated. The result was beyond our expectations. Not only did we build a unique connection and energy onstage, but the reaction from our audiences was shocking. The blues have the innate ability to move people of all kinds and all musical preferences.  It was a wonderful way to give back to our community and bond with our peers.  As Blues on Tues progressed, we realized that our desires had evolved to focus on writing original blues music.

Mark and I had been looking for a way to collaborate in terms of songwriting.  We met in 2006 when I hired him to be in my band for my solo project, but despite years of playing, producing and arranging together, we had never co-written.  We found the blues to be a natural, well-matched genre for our talents.  It wasn't long before the songs were flowing.  Blues on Tues became a easy opportunity for us to test new material. And just like that, the Blues on Tues crew had evolved into Fife & Drom and we were booking shows as an original act.

Despite the focus now being on our original music, we often throw a cover or two into our set lists. The blues is a genre where you will find countless recordings and versions of songs by multiple artists.  It's almost as if these songs are communal and open to individualized interpretation.  We find that covering a classic tune not only pays homage to the backbone of blues, but allows us the opportunity to have creative license and perform the music in a way it may not have been heard before.

One of our staple covers is Elmore James, "Stranger Blues".  The tune is gritty, driving and strangely hypnotic with its repeating riff.  We found it a perfect way to inject our original flair, while keeping true to the core components of the original.  Have a listen:
0:00/???
Subscribe with iTunes RSS feed Download